a journey THROUGH autism

a journey through autism with my brother

A word from Claire Finlayson

Dispatches from Ray’s Planet: A Journey through Autism was released by Caitlin Press Inc. in September 2020.

Based on a remarkable correspondence between me and my proudly eccentric brother, Ray, it pulls back the curtain on his thoughts and feelings as an undiagnosed autistic man in a neurotypical world. Long before either of us had ever heard of Asperger’s syndrome (now merged under the Autism Spectrum Disorder umbrella), Ray found the social world so treacherous and incomprehensible that he longed for a planet on which everyone would just say what they mean.

It turns out that Ray, to his everlasting horror, doesn’t know what’s going to come out of his mouth till he hears it. His mind, he tells me, lives in the nonverbal part of his brain, so he’s constantly having to translate his thoughts into speech in real time. His “Speaking Man”– as we have come to call this aspect of him – has gotten him into all sorts of trouble, including a night in jail, innocent of any crime other than not knowing when to shut up.

But Ray and I have discovered that placing computers between us causes his communication problems to magically disappear. His “Writing Man” is witty, wise, and a surprisingly astute observer of human nature.

Together, Writing Man and I examine important issues: empathy, eye contact, the advantages and drawbacks of labels like his, and why some truths are acceptable to say out loud, while others trigger swift and severe social penalties.  Read synopsis of Dispatches from Ray’s Planet. 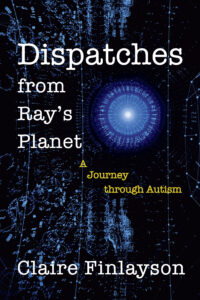 My sister has written a book about me. She is confident that stories about my life as an Asperger’s person will help others to gain some insights into the autistic mind and help you to understand how best to deal with we non-neurotypicals. Perhaps you know an Aspie or have a kid who is on the spectrum. You might be autistic yourself, or maybe you are just fascinated by the human mind. Do you know someone who just seems strange and refuses to play by the rules? This book might open your eyes.

Claire makes me look more interesting than I am, but I think you’ll enjoy these stories anyway – and learn something too. We Aspies do not think of ourselves as “broken”– but we do know that we are very different from you natives. Do not try to “fix” us (we think it is you who are broken), but please understand that we really don’t want to upset you even if it seems we are doing it on purpose. We aren’t. We just don’t understand your game.

“As you know, one of my biggest objections to normal society is that you do *not* tell the lady that her dress is stuck in her bum and you do *not* tell me that I’ve made some foul—though of course the tally is always kept.”

This book should be required reading for all special needs teachers – hell, all teachers and teaching assistants. Not to mention all the parents/siblings/assorted other relatives of Aspies who would stand to benefit hugely.

Even as a late-diagnosis Aspie with all the enthusiasm of a new convert who finally knows “what’s wrong,” I honestly haven’t been able to get through a couple of the popular books out there. This one I read twice…back to back…almost in one sitting. (Probably would have been one sitting if my wife hadn’t called me back to the other planet.) This is an important book. It has bridged the divide between ‘Aspies’ and ‘Typicals’ in a way I have not come across before. This is the story I want told.

Dear Claire – I am really happy that Ray is doing well.  Astronomy is a great way to get kids interested in science.  This book has opened some doors for both Ray and other individuals with autism.