For most of his sixty-one years, my brother Ray had not a clue that there was anything wrong with him, though he found plenty wrong with the rest of us. “On my planet,” he always said when we were growing up, “we would do things this way.” He would then explain the correct way, followed by a litany of things we were doing wrong here on Earth.

Ray survived high school by adopting the persona of Mr. Spock from the original Star Trek TV series. Most kids decided it was kind of cool having their very own Vulcan on campus. In fact, he came to enjoy a bit of a cult following. Looking back at those days he says, “Becoming Spock was my way of hiding in plain sight.”

But the end of high school meant the end of Ray’s quasi-celebrity as a Vulcan. He was just an impudent young man again, at the mercy of his mouth. He became a letter carrier for Canada Post—a strange career choice, our father protested, for a bright young man who was designing airships and steam engines in his spare time.

When he wasn’t delivering mail, Ray took to the sky in a small plane, climbed mountains and swam vast distances—anything to get as far away from the exhausting complexities of “polite society” as he could. But it wasn’t until he discovered free diving that he finally found the peace and solace that eluded him on land. He devoted himself to the practice and was eventually able to hold his breath underwater for 5 ½ minutes, attaining depths of over 100 feet. Long before deep pressure was recognized as a calming therapy for autistic people, my brother had found a “hug” that soothed and steadied him, rather like Temple Grandin’s squeeze machine does for her. 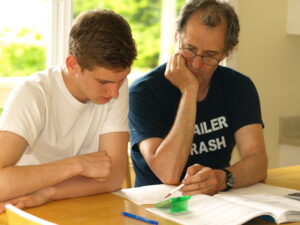 Ray adores classical music, poetry, astronomy and math—“the language in which God wrote the universe.” He has mentored countless young people in these disciplines, his gift for teaching readily apparent any time there is a topic about which he is knowledgeable and a rapt audience. Teaching is solid ground for Ray, in merciful contrast to the slipperiness of social banter where he is doomed to fail.

As a teenager, I vowed to find Ray’s planet, but it would be thirty more years before I first heard the term “Asperger syndrome” and realized that it perfectly described his perplexing combination of high intelligence and social difficulties. Reading about the famously eccentric pianist, Glenn Gould, (who has been diagnosed posthumously), I became convinced I had come across another voyager from Ray’s planet. Excited by my discovery, I e-mailed Ray with my theory that he, too, was an Aspergian. His reply? “Well, I don’t know if there’s any such thing, but whatever Gould had, I have. Brother. Fellow traveller. No doubt about it.”

I attended conferences, bought books and read obsessively on autism, sharing my findings with Ray, sure he would be as relieved as I was at finally having an explanation for his troubles, but I only succeeded in getting his hackles up. He wasn’t about to have a label pinned on him after surviving without one for so long, and he still loathes the idea that anyone with an internet connection and ten minutes to spare can google “Asperger syndrome” (as it was called until 2013) and presume to know who he is and what he is. He says, “I prefer to think of myself as an individual rather than as a nice specimen of the disability.” Even after accepting that he has a “condition” and that it has a name, he says with a note of defiance, “I hope to God a cure is never found. I may be a freak, but I don’t want anyone to change me.”

In contrast to his sometimes cringeworthy verbal performance, Ray is articulate and graceful in writing. When I e-mailed him about this paradox, his reply stunned me:

It’s sad, isn’t it? The only way I can communicate is in the one-dimensional world of text. It’s so limited, so tiny, but it’s the only thing I’ve mastered. My soul would speak with better tools if it knew how.

Ray and I realized that we could bridge our differences beautifully in writing, a medium in which time slows down and no verbal gaffes hamper the free flow of ideas, and our correspondence took off. We began distinguishing Ray’s “Writing Man” from his boorish stunt double, “Speaking Man.” Writing Man is not forced to blurt things out in the heat of the moment. He doesn’t make the sort of spontaneous comments (“Nice hooters!” to a shy adolescent niece in a training bra) that land Speaking Man in hot water with such depressing regularity. It turns out that Ray’s primary language is not words at all; his mind, he says, lives in the non-verbal half of his head, so he’s always translating. He doesn’t know what’s going to come out of his mouth until it’s too late—“I hear it,” he says with a shudder, “when you hear it.” He is traumatized by his verbal blunders, describing himself as “mostly always terrified” in social situations.

One of those things everybody “knows” about people on the spectrum is that they don’t like making eye contact. That’s true, Ray says, but he avoids gazing into other people’s eyes because he sees too much there. As for his supposed lack of empathy—another thing everybody “knows” about autistic people—Ray is in fact richly endowed with this quality, sometimes weeping as he types an e-mail to a distraught friend. Given a keyboard and enough time to compose and edit his thoughts, a new man shimmers into view.

Ray may be different, but he’s not dangerous. There are legions of people like him who live in that difficult place, too “normal” to receive the concessions granted to the obviously handicapped, yet too “other” to pass as “normal.” I wonder if they, like Ray, dream of life on a planet where they aren’t “mostly always terrified.”